The Mindanao Examiner Regional Newspaper May 2-7, 2016 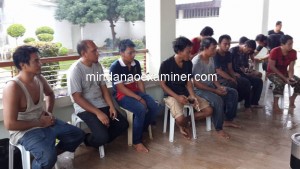 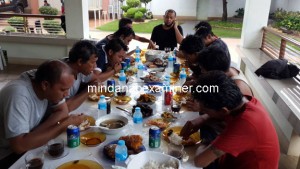 Sulu Gov. Totoh Tan speaks on the phone while feeding the 10 Indonesian sailors who were freed by the Abu Sayyaf in Jolo town in the southern Philippines on May 1, 2016 after more than a month in captivity. (Mindanao Examiner)

SULU – Abu Sayyaf militants have freed Sunday 10 Indonesian sailors after more than a month in captivity in the southern Philippines, officials said.

Tan’s security guards noticed the men and asked who they were and upon learning they are Indonesians, the governor was immediately informed.

He ordered the men inside the house where they had been fed. A video of the freed hostages was also taken for documentary purposes while they were feasting on fried chicken and fish, and rice.

The governor quickly phoned the military and police about the Indonesians and handed them over to the authorities and brought to an army base where doctors examined them.

It was unknown if ransoms had been paid for the safe release of the hostages – who were all crew members of the tugboat Brahma 12 kidnapped on March 26 off Tawi-Tawi province in the troubled Autonomous Region in Muslim Mindanao.

Indonesian media reported that the company that owns the tugboat – Patria Maritime Lines – was willing to pay ransoms in exchange for the hostages, believed being held by Alhabsi Misaya, a rebel commander also tagged as behind the recent kidnappings of 4 Malaysian seamen – Wong Hung Song, 44, Wong Teck Pang, 41, Wong Teck Chi, 39, and Johnny Lau Jung Hien, 21 – all from Sarawak in the oil-rich state of Sabah in Malaysia.

Television giant GMA 7 reported that the Moro National Liberation Front helped in the negotiations for the safe release of the hostages, but this could not be independently confirmed, although the former rebel group previously negotiated for the freedom of Malaysian hostages held by the Abu Sayyaf.

Jakarta was said to have monitored the progress of the private negotiations between the kidnappers and the ship owner. Indonesia earlier said that it is ready to send police commandos to the Philippines to rescue the hostages.

“There have been a lot of efforts by the local and provincial government and the military and police in securing the safe release not only of the Indonesians, but other hostages as well. The recovery of the ten Indonesians is good news. We hope and pray that the others may also walk freely away from their captors,” Tan told the regional newspaper Mindanao Examiner.

The release also coincided with the ongoing military operations against the Abu Sayyaf which pledged allegiance with the Islamic State in Iraq and Syria. There were no immediate statement from the military’s Western Mindanao Command and the police authorities in the Muslim autonomous region about the release of the hostages.

The Abu Sayyaf beheaded a Canadian hostage John Ridsdel on April 25 after his family and government failed to pay P300 million ransom. The jihadist group is also holding Dutchman Ewold Horn, who was kidnapped in Tawi-Tawi; Canadian Robert Hall, Norwegian Kjartan Sekkingstad – who were all seized from the posh resort of Samal Island in Davao del Norte province; and Japanese treasure hunter Toshio Ito also known as Amir Katayama Mamaito. (With a report from Ely Dumaboc)