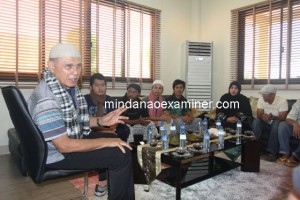 Military intelligence reports said Teo Kopong, Lorenz Koten and Emmanuel – who were kidnapped in July in Sabah, Malaysia – had been handed over by the Abu Sayyaf to the former rebel group Moro National Liberation Front (MNLF).

Some P30 million in ransoms were reportedly paid to the Abu Sayyaf by Indonesian negotiators led by former Indonesian army general Kivlan Zein.

No other details were available surrounding the negotiations, but the safe release of the hostages came barely two days after Abu Sayyaf also freed a Norwegian hostage Kjartan Sekkingstad for P30 million ransoms. The militants handed over Sekkingstad to an MNLF commander Tahil Sali, who allegedly helped in the negotiations, according to an army report.

The Philippine military’s Western Mindanao Command had linked Sali to deadly attacks against government forces in Sulu and that he fought alongside the Abu Sayyaf in recent years.

Zein – through the MNLF under its chieftain Nur Misuari – also negotiated for the separate release of 14 kidnapped Indonesian sailors in Sulu in May this year.

The Abu Sayyaf – which pledged allegiance with the Islamic State militant group – is still holding four Malaysian sailors, three Filipino fishermen, a Dutch photographer and a Japanese treasure hunter in southern Philippines. (With a report from Ely Dumaboc)