DTI will have new chief, 2 other Cabinet secretaries named by Duterte 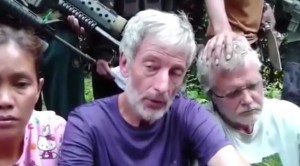 ZAMBOANGA CITY – Security forces have recovered the severed head of Canadian national Robert Hall who was executed by the ISIS-linked Abu Sayyaf group in southern Philippines, the military said.

It said the head was discovered by civilians outside a Catholic church in the town of Jolo in Sulu, one of five provinces under the volatile Muslim autonomous region, where Hall, 50, was killed Monday afternoon.

Army Major Filemon Tan, a spokesman for the Western Mindanao Command, said the head is now in the custody of police forensic experts. He said Hall’s body is still missing.

It was unknown why the police and military failed to arrest those who dumped the head in Jolo despite the huge presence of security forces in the town.

The military and the provincial government condemned the brutal murder of Hall which coincided during the holy month of Ramadan.

He was the second Canadian hostage beheaded by the Abu Sayyaf since April after it killed 68-year old John Ridsdel in Sulu when it failed to get ransoms from their families and their government. Ridsdel’s severed head was also dumped in Jolo hours after he was murdered.

The Abu Sayyaf demanded P300 million for each of the hostages, who were kidnapped along with Norwegian Kjartan Sekkingstad, 56, and his Filipina girlfriend, Maritess Flor on September 21 last year on Samal Island in Davao Oriental province and brought by boat to Sulu.

The military’s Western Mindanao Command under General Mayoralgo dela Cruz did not give any details of the on-going operations against the Abu Sayyaf in Sulu. President Benigno Aquino has previously ordered a massive assault on the jihadist group also blamed for the spate of terrorism there.

Regional Governor Mujiv Hataman also denounced Hall’s murder. “It has only been a week since Ramadan began, and it is appalling that this holy month we set aside for prayer and reflection has been already been violated by extremists here and abroad, as they wage violence in the name of our faith,” he said.

Hataman said the extremists claim to follow the faith while they go against Islam’s message of peace and humanity.  He said their betrayal of Islam knows no bounds that even in the most holy days of Ramadan; they turn a time meant for prayers and contemplation into days of fear and horror.

“Violence cannot and must not be so easily associated with one people, race, or culture. Many try to distort the Islam we know by heart, and it is our responsibility to make the truth of Islam known to people.  Those who tread the path of violence and claim to do it in the name of Islam are, without question, merely men of sin who distort a faith that stands for peace,” he added.

Canada’s Prime Minister Justin Trudeau also denounced Hall’s murder and branded the killing as “vicious acts of hatred and violence.” He praised Hall’s family for their strength of character in their resilience in the face of what he described as a terrible situation.

“This is a grievous loss for them, and their country mourns with them,” Trudeau said in a brief press conference in the foyer of the House of Commons, according to Canada’s CBC News.

But the Canadian Embassy in Manila released Trudeau’s full statement: “It is with deep sadness that I have reason to believe that a Canadian citizen, Robert Hall, held hostage in the Philippines since September 21, 2015, has been killed by his captors. While Canadian officials are working closely with authorities in the Philippines to formally confirm Mr. Hall’s death, we have compelling reason to believe that reports to this effect are, unfortunately, true. The vicious and brutal actions of the hostage-takers have led to a needless death.”

“Canada holds the terrorist group who took him hostage fully responsible for this cold-blooded and senseless murder. With the tragic loss of two Canadians, I want to reiterate that terrorist hostage-takings only fuel more violence and instability. Canada will not give into their fear mongering tactics and despicable attitude toward the suffering of others. This is precisely why the Government of Canada will not and cannot pay ransoms for hostages to terrorists groups, as doing so would endanger the lives of more Canadians.We are more committed than ever to working with the Government of the Philippines and international partners to pursue those responsible for these heinous acts and bring them to justice, however long it takes. The Government’s top priority, and my own as Prime Minister, is the safety and security of Canadian citizens. On behalf of the Government of Canada and all Canadians, I would like to express my heartfelt condolences to the family and friends of Mr. Hall.”

“They have suffered a terrible loss, and this is a devastating moment for them. Our thoughts are with them as they mourn this tragedy. I would ask that the media respect their privacy, and allow them time to come to terms with their loss. Today marks yet another difficult day for Canada and for Canadians as we grieve as a nation for the loss of both John Ridsdel, who was killed on April 25, and Robert Hall.” (Mindanao Examiner)