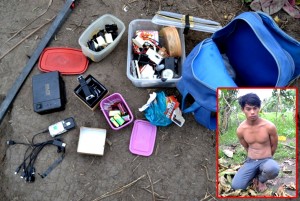 Philippine authorities raid a hideout of suspected bomb-makers in Mlang town in North Cotabato province and arrested Jokrie Andong Buisan in this photo provided by the provincial police.

COTABATO CITY – A government soldier was wounded following a roadside explosion in the restive province of Maguindanao in the Muslim autonomous region in southern Philippines, officials said on Wednesday.

Officials said 5 more improvised explosives were recovered by soldiers and policemen in the towns of Datu Odin Sinsuat and Sultan Kudarat.

No individual or group claimed responsibility for the foiled attacks, but this coincided with police information that the recent bombing in Davao City was probably the handiwork of the Malaysian militant Jemaah Islamiya and the local Bangsamoro Islamic Freedom Fighters and followers of slain Malaysian bomber Zulkifli Abdhir alias Marwan.

Several jihadist groups are actively operating in Maguindanao and its neighboring provinces which authorities said were behind numerous bombings in the region.

Authorities were also hunting down two brothers – Guiamadel and Anwar Sandigan – who are known bomb-makers in North Cotabato province, who escaped a recent raid by soldiers and policemen in the town called M’lang.

One of the brothers’ henchman, Jokrie Buisan, was arrested and that the raiders seized a fragmentation grenade and materials used in the manufacture of improvised explosives, including cell phones, blasting caps and black powder.

It was not immediately known whether the trio had anything to do with the bombing in Davao City that killed 15 people and injured over 60 civilians at a crowded night market there. (With a report from Moh Saaduddin)