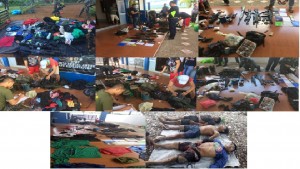 Military photos released to the regional newspaper Mindanao Examiner show the bodies of slain rebels and weapons recovered by troops in Mati City in southern Philippines.

DAVAO CITY – Troops clashed with communist insurgents on Sunday and killed a still undetermined number of gunmen in Mati City in the southern Filipino province of Davao Oriental, a military spokesman said.

Army Captain Andrew Linao said no casualties were reported on the military side following a 45-minute gunfight in the village called Kauswagan. Soldiers from the 28th Infantry Battalion recovered two automatic rifles, munitions and a rifle grenade, including radio communication sets and backpacks, according to Linao.

“There were no casualties from the government side will a still undetermined numbers of rebels were killed in the fighting,” he said, adding, troops were sent to the area after villagers tipped off the military on the presence of New People’s Army rebels there.

Just on Saturday, three rebels were also killed in fighting in Taytayan village in Davao Oriental’s Cateel town and soldiers recovered 5 automatic rifles in the area. The fighting occurred the same day that the military clashed with another group of NPA fighters in Araibo village in Pantukan town in Compostela Valley that also left one rebel leader dead.

Colonel Reuben Basiao, commander of the 701st Infantry Brigade, confirmed the series of clashes with rebel forces and said the operation will continue against the NPA. “Troops are there in the area to secure the people as part of our effort in conducting community support program and deliver basic services to the people together with other government agencies. Your Army here in Davao Oriental will always secure your safety as part of our mandate of protecting the people and securing the land,” he said.

The NPA has been waging a secessionist war for many decades now and despite the ongoing peace talks, fighting also continues in many areas in the southern Philippines. (With a report from Roderick Beñez.)