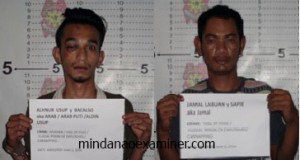 He said the men are followers of Abu Sayyaf leader Indang Susukan in Sulu province and that Usup is wanted by authorities for his involvement in many murder cases.

It was unknown if Usup – who lives in Talon-Talon village here and Labuan, a resident of Taluksangay village, also in Zamboanga – were planning to kidnap or launch terror attacks in the largely Christian city.

Alabata said policemen were trying to serve arrest warrants on the duo, but they managed escape on a motorcycle, forcing lawmen to chase them and eventually captured in one of Zamboanga’s red light district.

Mayor Beng Climaco lauded the police for the arrest of the rebels. (Mindanao Examiner)