ZAMBOANGA CITY – Some 10,000 people, mostly victims of rebel siege in Zamboanga city in 2013, are expected to benefit from the benevolent Bangsa Sug Iftar Caravan in transitory sites here.

The caravan is an initiative by the Bangsa Sug Consensus of the Royal Council of the Sulu Sultanate thru its Special Envoy and spokesman Dr. Sakur Tan, also known as Datu ShahBandar. 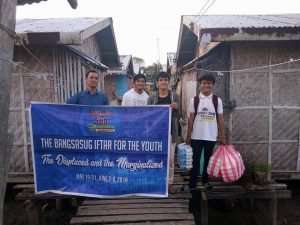 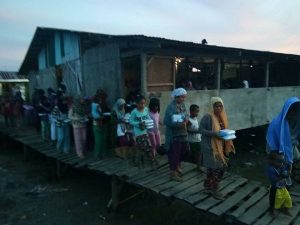 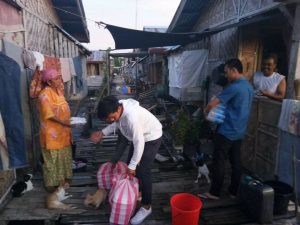 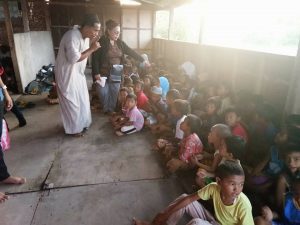 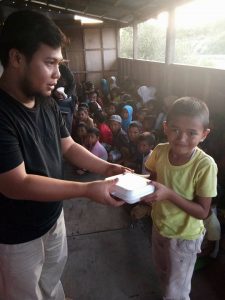 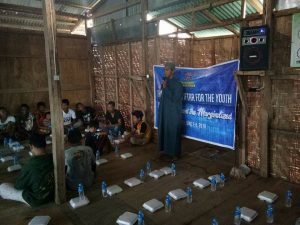 Volunteers of the BangsaSug Iftar for the Youth, the Displaced and the Marginalized during the distribution of Buka-Puasa food packs in transitory sites in Zamboanga City. (Photos courtesy of Nahdin Jubaira.)

The 11-day caravan, dubbed as “The BangsaSug Iftar for the Youth, the Displaced and the Marginalized”, began on May 21 with Serhan Cuevas Daris leading volunteers in the distribution of Buka-Puasa food packs.

Muslim leaders and various stakeholders in Mindanao are pushing for the separation of Basilan, Sulu and Tawi-Tawi from the Autonomous Region in Muslim Mindanao and include the provinces in Zamboanga Peninsula to form a federated state should Congress approve the proposed federalism government which President Rodrigo Duterte is strongly advocating.

In a consensus held on May 10, stakeholders from Zamboanga Peninsula, Basilan, Sulu, Tawi-Tawi and Maguindanao trooped to Zamboanga City to read their manifesto as a show of strong support to the proposal for the creation of ‘Federal State of ZamBaSulTa’.

Among the valid justifications for the proposed Federal State of ZamBaSulTa are Economic Viability and to ensure this is to group together Zamboanga Peninsula with Zamboanga City as the center, and Basilan, Sulu and Tawi-Tawi; Historical Reality as the shared history of the area and proposed federal state is a strong argument for its unity as one federal state. This history stems from the once dominant force exerted by the Sulu Sultanate over these areas, including Southern Palawan and the islands of Sulu and South China Seas, but the consensus also maintained that this is not to say the Sultanate of Sulu will again lay claim to these areas, instead, the region is now witness to different operative local government units that wield the real power and that cannot be changed.

It also cited other justification for the union such as Geographical Proximity because the provinces and Zamboanga City is contiguous to each other by land, and Basilan, Sulu and Tawi-Tawi are situated next to each other like a chain of island south of the Zamboanga Peninsula. And Demographic and Cultural Identity because of similarity in culture and peoples – Muslim and Christian relationship, education and interfaith engagements have strengthened this identity in the region.

At least 5 influential Sulu sultans, Ibrahim Bahjin, Muizuddin Jainal Bahjin, Muedzul-Lail Tan Kiram, Mohammad Venizar Julkarnain Jainal Abirin and Phugdalun Kiram who are part of the Royal Council of the Sulu Sultanate, also attended the event dubbed – “The Bangsa Sug Consensus – ZamBaSulTa. A People of Significance.” – and threw their all-out support for the proposal along with Muslim religious leaders led by the Grand Mufti, His Eminence Abdulbaqi Abubakar.

Zamboanga City Vice Mayor Cesar Iturralde, who represented Mayor Maria Isabelle Salazar, read a message in front of some 1,500 people. Christian and Muslim political leaders, among them Tan who is a strong ally of Duterte, – and his son, Totoh Tan, the current governor of Sulu, spoke in the event.

The Tan patriarch, in a position paper he read before the huge crowd, enumerated several concerns and reaction of Muslims to the proposed Bangsamoro Bill and federalism. He said the main objections of the people of Sulu through its Sultanate to the proposed Bangsamoro law center on the provisions on Territory that would change the historical name of the Sulu Sea to “Bangsamoro Waters.” He said Sulu Sea should retain its name.

Tan said the constituents in the provinces under the ARMM (including Lanao del Sur and Maguindanao) should be given the option to vote against inclusion in the new Bangsamoro entity. “The position is anchored on the principle of democratic consultation which is an essential element of plebiscites and a basic concept in Islam, as embodied by the principle of Shura (or consultation) in the Holy Qur’an.”

“The method of plebiscite and the counting of votes should be based on real democratic consultation and should not be hampered by what may be considered as the tyranny of the majority,” the elder Tan said.

“This should never be presumed because presumption destroys the democratic essence of plebiscites. Precisely for the reason that the Bangsamoro entity is new, and is not just an amended version of the ARMM, the consent and option of the ARMM constituent provinces should be respected,” he said.

Tan said when the constituent provinces voted for inclusion to the ARMM in past plebiscites, they consented to be included in the ARMM, and not in the Bangsamoro which is completely new legal entity. “Ratification therefore should be on the basis of the majority votes of each constituent province and not of the entire geographical area of the present ARMM,” he said.

He said the territorial lines of federalization should not be dictated by religious dogma for this would be limiting, counter-productive and contrary to the spirit of nationhood. “The federal territorial divide is not a divide of peoples and religions; it is a realistic and practical divide of administration and governance, so that the people get the best and most viable governance that befits their needs and circumstances,” Tan said, adding, a copy of the consensus would be submitted to the House of Representatives and Senate, and the Palace. (Mindanao Examiner)