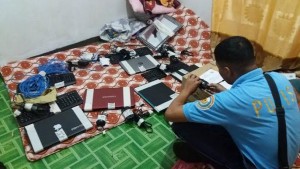 A policeman takes a photo of seized laptops and tablet computers in the house of a PO2 Joel Belleno in Zamboanga del Norte’s Latipunan town in these police photos released to the media. (Ely Dumaboc) 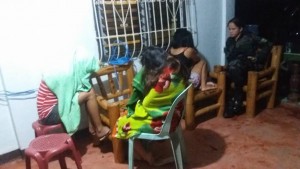 ZAMBOANGA CITY – A policeman and a civilian were arrested on human trafficking charges after police forces rescued 5 women in a house in Katipunan town in Zamboanga del Norte province, officials said Friday.

Officials said PO2 Joel Belleno, who is assigned with municipal police force; and Amelito Jake were being investigated following their arrest. Policemen swooped down on Belleno’s house after receiving information that a group of women was recruited to work abroad.

Police also seized laptop and tablet computers from the house of Belleno. No other details were made available by the police due to the ongoing investigations. The accused did not give any statement. (Ely Dumaboc)