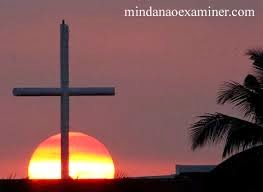 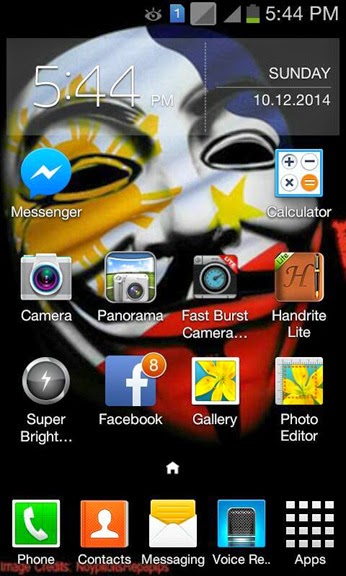 A structure blocks the view of the sun as it sets in Zamboanga City in southern Philippines. And a mobile phone screen shot that shows no signal bars in both services from Smart Communications and Globe Telecom.  (Mindanao Examiner Photo)

ZAMBOANGA CITY – Telecommunication firm on Sunday cut off all mobile communication in Zamboanga City in southern Philippines to ensure terrorists would not be able to detonate bombs using cell phones during the annual Catholic procession in honor of the Virgin Mary.

Zamboanga is celebrating the month-long Hermosa Festival and the grand procession is the highlight of the event which is a long tradition in this former Spanish colony.

Thousands of devotees have been participating in the procession where different statues of Jesus Christ and the Virgin Mary are also paraded in downtown Zamboanga.

Smart Communications and Globe Telecommunication have not issued any statement about the shutdown of cell phone communication which lasted a few hours. It was not the first time this had happened in Zamboanga City which was bombed in the past by Abu Sayyaf militants.

Police Chief Angelito Casimiro said they have received reports about the abandoned thermos at Plaza Pershing near the City Hall building, and immediately deployed the bomb squad – a standard operating procedure – and eventually destroyed the suspicious item.

Mayor Maria Isabella Salazar said concerned citizens reported the presence of the abandoned thermos at the park. “Police and military just responded on a suspicious item and they disrupted it (using projected water disruptor). We thanked the citizens for being vigilant for reporting suspicious items,” she said.

Disruptors utilize a water projectile shaped charge (an omni-directional format more commonly referred to as a “bottler”) to destroy improvised explosives by severing any detonation cord inside the device, rendering it futile.

Both Casimiro and Salazar did not say whether the thermos contained an explosive or not. But the regional police said it had wirings and contained white granules believed to be ammonium nitrate.

“After the disruption, it was noted that the content of said canister were wiring and white granule materials. A SOCO (Scenes of Crime Officer) team was dispatched to the area to conduct scene processing and collection of debris for examinations. No one was hurt during the disruption,” said Insp. Dahlan Samuddin, a regional police spokesman.

He said witnesses told police investigators that they saw a woman, accompanied by a man, carrying the thermos at the plaza and left it on a concrete bench. “Initial investigation disclosed that prior to the discovery of the thermos, some of the bystanders saw a woman wearing a veil with a male companion carrying said thermos and entered inside the premises of Plaza Pershing and sat at the bench. Moment later, the woman left the area leaving behind the thermos,” Samuddin said.

The plaza – named after U.S. military commander Gen. John “Black Jack” Pershing who defeated Muslim insurrection in southern Philippines almost a century ago – was also bombed by the Abu Sayyaf in August 2007 that left more than a dozen people.

Police and military authorities have tightened security in Zamboanga City which is celebrating the month-long Fiesta Hermosa Festival in honor of the Virgin Mary.

Hundreds of soldiers and policemen were deployed in Zamboanga virtually turning the city in a garrison in an effort to protect the public from terror attacks. And additional troops were also sent to nearby provinces to fight the Abu Sayyaf and other lawless groups supporting jihadist members of the Islamic State of Iraq and Syria or ISIS.

“The objective of the redeployment of forces is to have a right force mix based on situation assessment. Through these additional forces, tracking down and containment of the Abu Sayyaf Group and other lawless elements in Western Mindanao will be easily achieved.”

“The Western Mindanao Command ensures the security of the conflict and threatened areas with all available units and assets being deployed. However, to attain a fully secured community, cooperation from the different sectors of the populace is being encouraged so that the security forces will be able to assess and make necessary counter actions on the given situations,” said Marine Captain Maria Rowena Muyuela, a spokesperson for the Western Mindanao Command.

The Abu Sayyaf and members of the Bangsamoro Islamic Freedom Fighters and civilians in the Muslim autonomous region have pledged allegiance to ISIS. But Muyuela said the military and police authorities are verifying reports of alleged recruitment of ISIS.

“These groups who claim to be part of the ISIS are believed to be riding on the prominence of the ISIS threat just to get the sympathy of their target recruits. The Western Mindanao Command, together with the police and the local governments, are jointly exerting all efforts to further validate the alleged recruitment of Muslim-Filipinos within Western Mindanao. Continuous monitoring on said report is being undertaken by security forces.”

“Thus, we are urging local communities to get involved with the security efforts of the government and the Armed Forces as they are the most reliable and potential group to provide durable information and initial security of their community from threat groups,” Muyuela said. (Mindanao Examiner)