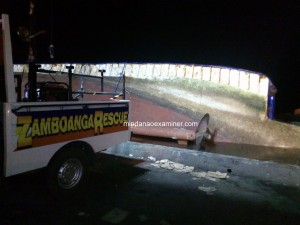 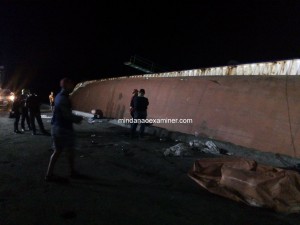 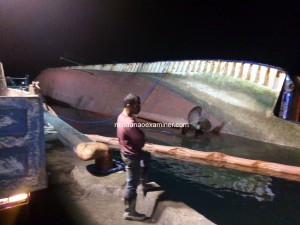 The Philippine ferry, Danica Joy 2, after it keels over on its side at the Port of Zamboanga. (Mindanao Examiner Photo – Ely Dumaboc)

ZAMBOANGA CITY – A Filipino ferry listed on its side while anchored at the Port of Zamboanga City and eventually flooded the ship, officials said on Friday.

Officials said Danica Joy 2 rolled on its keel and capsized late Thursday, but there was no report of casualties. The ferry arrived Zamboanga from Sandakan in Malaysia at 4 p.m. on Thursday and by five hours later half of the ship was underwater.

The ferry is owned by Aleson Shipping Lines which operates a fleet of passenger ships in the Visayas in central Philippines and in Mindanao in the southern region.

Aleson executives did not give any statement, but one man, believed to be a shipping line official prevented crewmen from talking to journalists covering the incident. (Ely Dumaboc)