ZAMBOANGA CITY – Gunmen clad in police and military uniform abducted a businessman in a daring raid in his home in Kabasalan town in the southern Philippine province of Zamboanga Sibugay, officials said Monday.

Officials said at least 6 men, armed rifles and guns, barged in the house of Alejandro Bation in the coastal village of Nazareth late Sunday and dragged him out to a waiting motorize boat. 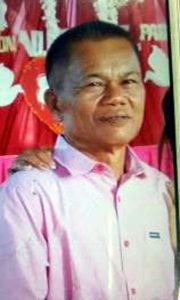 The 58-year old trader, whose family owns a fishpond, was having dinner with his sons and a worker and a visitor, when the gunmen broke inside the house, said Chief Inspector Helen Galvez, a regional police spokeswoman.

“Six unidentified men, armed with long and short firearms, and wearing military and police uniform entered the premises and two of them went inside the house and pointed their gun and drag the victim going outside the house towards the mini wharf of said barangay and boarded to one of the three motorized pump boats. The armed men fled towards the coastal waters of Naga and Payao municipalities,” she said.

Galvez said police forces pursued the gunmen after receiving a report, but did not catch up with the abductors and their hostage. No individual or group claimed responsibility for the abduction, but several rebel groups are actively operating in the province and were largely blamed in past ransom kidnappings in the area.

In April, at least 7 gunmen also kidnapped a woman, Laarni Bandi, who works as a secretary for Celebes Marine Products, in the coastal town of Malangas in Zamboanga Sibugay. The 38-year old woman was released a month later after her family reportedly paid an unspecified amount of ransom to the kidnappers.

Armed men also kidnapped 6 people on July 1, including an infant, from a farm in Sirawai town in the neighboring province of Zamboanga del Norte. The gunmen, whose leader has been identified as Jamilon Tukalan, demanded P400,000 for the safe release of the hostages – Feliciano Javier, 28; his wife Elsa, 28, and their five-month old baby Vincent; and Junior Javier, 22, and wife Rica, also 22-years old and their five-year old son Val. All are keepers of farm owned by Valiente Tolo Felizarta, the town’s municipal engineer.

The town’s deputy mayor, Jaime Felizarta, has told police investigators that a man, who identified himself as “Abu”, is holding all the hostages and demanded the ransoms. (Mindanao Examiner)