ZAMBOANGA CITY – It was a sweet victory – the second as a matter fact – for the family of Hidilyn Diaz, a local weightlifter, who won gold medal Tuesday in the 2018 Asian Games in Jakarta.

Hidilyn, who also won a silver medal in the 2016 Rio Olympics, defeated Kristina Shermetova of Turkmenistan in the 53kg weightlifting division – the first gold for the Philippines. “It was God’s answer to our prayers and we thanked God for the graces he showered us, especially Hidilyn, who really trained hard for this (2018 Asian) games,” says his 57-year old father, Eduardo, who stopped driving the family’s motorcycle taxi after Hidilyn won in the Rio Olympics. 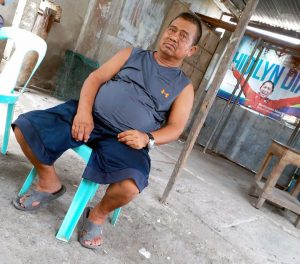 He said Hidilyn gave him enough money to start a small fish pond business in their village, Mampang, about 10 kilometers from downtown Zamboanga. “I now take of our fish pond, it is not too big just about two hectares,” Eduardo says.

His tricycle, which bears a painting of Hidilyn lifting a barbell, is being driven by a relative. The family also has a small car which was given by the Universidad de Zamboanga to Hidilyn for winning silver in the Rio Olympics. Hidilyn now stands to get at least P5 million in bonus for the Philippines’ gold medal in Jakarta. 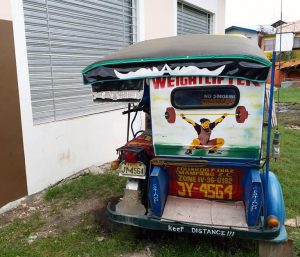 Eduardo confides that his whole family, friends and neighbors went to Fort Pilar on Monday and Tuesday and prayed really hard, asking God to bless Hidilyn as she prepares for the games. “We really prayed hard, real hard and God listened to our prayers, to our pleadings and we thanked God for this,” he says.

Hidilyn’s sister-in-law, the 35-year old Elymay, who lives with the Diaz’s family in a modest bungalow the famed weightlifter built in their village after the Rio Olympics, swears by the power of prayers.

“We all prayed for two days before the games. We talked to God and there it is, and victory goes to all of us, our country. Glory to God,” she says, adding, Hidilyn’s mother, Emelita, who was in her daughter’s condominium apartment in Manila, was crying hard after watching the Asian Games from her television and saw her daughter win the gold medal.

“She phoned us and she was crying really hard and we were all worried because she is alone in the condominium with Hidilyn’s pet dog. We told her to calm down and we also broke into tears, tears of joy,” says Elymay.

She says they were also able to talk with Hidilyn on the phone after winning the gold and she was also crying.

Eduardo says his daughter started lifting weight at age 9 and his then had been training hard with her cousins in the family’s backyard and sometimes in private gym if she had extra money. “She started training at nine years old with her cousins, who influenced her to join them and lift weights,” he says. 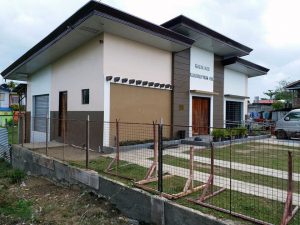 One of Hidilyn’s cousins, Roel Lardia, is helping train young men in the gym that she had built in 2016 from the money she got in winning the Rio Olympic silver medal. The 21-year old Roel says more than two dozen people are enrolled in the gym – free of charge – and all wanted to follow Hidilyn’s footsteps in weightlifting.

“Oh! All of them are really serious in training at the gym. Everything is free and Hidilyn built that gym for everybody, especially the youth. She is really a big influence to all of them,” says Elymay.

While the whole neighborhood celebrates Hidilyn’s winning, news and commentaries on radio and television stations here focused on local politics and the rice crisis plaguing Zamboanga. The news of Hidilyn’s snaring the silver in Jakarta was hardly played. “Yeah, we also noticed that, but it is okay. The important thing here is that Hidilyn has brought honor not only to the country, but to all Filipinos. It is a pride for us Zamboanguenos to win the gold,” Elymay says.

Hidilyn’s father also managed to speak to his daughter via video call and they talked briefly as cell phone signal in the village is poor. During the short conversation, Hidilyn tells her father that she wants to continue her college degree and is excited to come home. 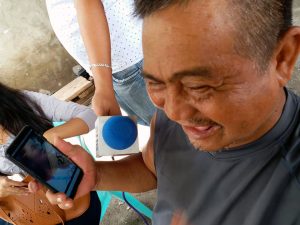 “We may throw a big welcome for Hidilyn, us and our relatives and their neighbors and friends who supported her throughout the years of her training,” Eduardo says.

Eduardo, clad in a gym shirt and sits on a plastic chair in front of his house, says he would ask Hidilyn to improve their two-year old bungalow. “I want a second floor. It is too hot in here. We will do more improvements to this house,” he says, pointing at the beige-color bungalow. 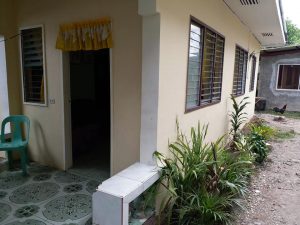 Hidilyn has a sister and four brothers. While many Filipinos celebrate the country’s first gold medal in the 2018 Asian Games, no politicians went to the Diaz’s family to congratulate them. “No one came here and it’s okay. Only you and some television people visited us today,” he says. (Mindanao Examiner)