Julian Assange arrested at Ecuadorian embassy in London: The Guardian

Julian Assange arrested at Ecuadorian embassy in London: The Guardian

‘WikiLeaks founder taken into custody on US extradition warrant and for failing to surrender to bail.’ 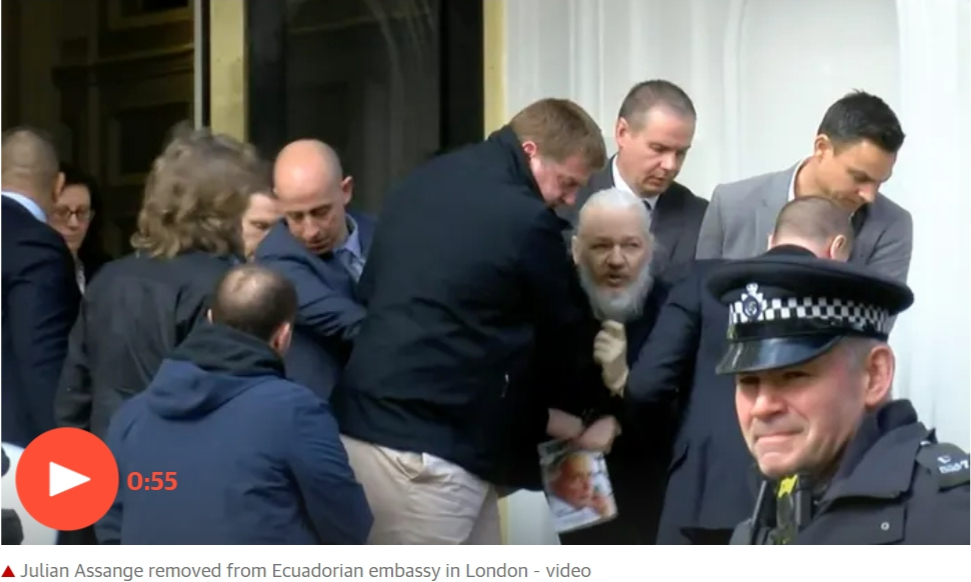 POLICE HAVE forcibly removed the WikiLeaks founder, Julian Assange, from the Ecuadorian embassy in London and arrested him, as the Ecuadorian government withdrew asylum.

Assange, 47, was taken into police custody for failing to surrender to bail and on a US extradition warrant, after Metropolitan police officers were invited into the Knightsbridge embassy. He had taken refuge there for almost seven years to avoid extradition to Sweden where authorities wanted to question him as part of a sexual assault investigation.

He was being held on Thursday on a warrant issued by Westminster magistrates court on 29 June 2012 when he failed to surrender to the court.

Footage showed Assange, now heavily bearded, shouting and gesticulating and being carried out in handcuffs by plainclothes officer and put in a police van shortly after 10am.

Assange had refused to leave the embassy, claiming he would be extradited to the US for questioning over the activities of WikiLeaks.

Scotland Yard said: “He has been taken into custody at a central London police station where he will remain, before being presented before Westminster magistrates court as soon as is possible.

“The MPS [Metropolitan Police Service] has a duty to execute the warrant, on behalf of Westminster magistrates court, and was invited into the embassy by the ambassador following the Ecuadorian government’s withdrawal of asylum.”

The president of Ecuador, Lenín Moreno, said on Twitter: “In a sovereign decision Ecuador withdrew the asylum status to Julian Assange after his repeated violations to international conventions and daily-life- protocols.”

Outside the Ecuadorian embassy a group of reporters were interviewing a sole Assange supporter wearing a placard reading “free Julian Assange” around his neck.

Kyle Farren, 22, from Knightsbridge, said: “I think I might have arrived just as he was taken. He was taken at around 10.30.

“When I arrived there was three vans all parked out here and there was a semi-circle of police around the entrance, and a policewoman asked me to move on.”

A police van filled with officers that was outside the door of the embassy left soon after the Guardian arrived. Across the road several dozen broadcast news journalists set up their cameras and lights. But only a single Assange supporter, Farren, remained outside, manning a shrine to the publisher and taking interviews with reporters from around the world.

An arrest warrant was issued for Assange in 2010 for two separate allegations – one of rape and one of molestation – after he visited Sweden for a speaking trip. He launched a legal battle against extradition to Sweden but when that failed entered the embassy in Hans Crescent and requested political asylum.

Elisabeth Massi Fritz, a lawyer for one of the two women who accused Assange, welcomed the arrest. “My client and I have just received the news that Assange has been arrested. That what we have been waiting and hoping for for almost seven years has now happened is clearly a shock to my client. We will do everything we can to ensure that the prosectors resume the Swedish preliminary investigation so that Assange can be extradited to Sweden and prosecuted for rape.”

The Swedish prosecution authority is expected to issue a statement later.

Assange’s arrest comes one day after WikiLeaks accused the Ecuadorian government of an “extensive spying operation” against him, during which they claimed meetings with lawyers and a doctor inside the embassy over the past year were secretly filmed.

The arrest was welcomed by the foreign secretary, Jeremy Hunt, who tweeted: “Julian Assange is no hero and no-one is above the law. He has hidden from the truth for years. Thank you Ecuador and President Lenin Moreno for your cooperation with the Foreign Office to ensure Assange faces justice.”

Though the Ecuadorian government was sympathetic at the time Assange sought refuge, regime change in 2017 has seen a toughening of its stance.

Hunt said Moreno “took a courageous decision which has meant we’ve been able to resolve the situation today”.

“We’re not making any judgment about Julian Assange’s innocence or guilt – that is for the courts to decide – but what is not acceptable is for someone to escape facing justice and he’s been trying to do that for a very long time.”

The home secretary, Sajid Javid, tweeted: “Nearly 7yrs after entering the Ecuadorean Embassy, I can confirm Julian Assange is now in police custody and rightly facing justice in the UK.” He added “No-one is above the law.”

The Europe and Americas minister, Sir Alan Duncan, said: “It is absolutely right that Assange will face justice in the proper way in the UK. It is for the courts to decide what happens next.” He said the arrest followed “extensive dialogue” between the UK and Ecuador.

Assange supporters reported increased police activity at the embassy last weekend Two armed officers went into the building on Saturday and people taking part in a vigil said teams of plain clothes officers were outside the embassy throughout the weekend. (Caroline Davies, David Crouch, Kate Lyons and Damien Gayle. The Guardian)