The bus owned by Yellow Bus Lines after it was torched by suspected New People’s Army rebels in Tupi town in South Cotabato province in the Philippines. (McLha Dhaldives Joven Tonacao) 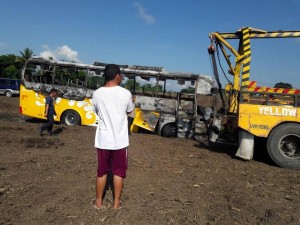 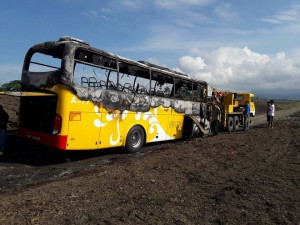 COTABATO – Suspected communist rebels hijacked and torched a provincial bus on Sunday in the southern Philippines, police and military said.

It said the attack occurred in the town of Tupi in South Cotabato province where rebels intercepted the bus owned by the Yellow Bus Lines. No passengers were hurt in the arson attack. The bus came from Koronadal City and was heading to General Santos City at the time of the attack.

The gunmen identified themselves as members of the New People’s Army which recently agreed to a cease-fire with the Duterte government.

The motive of the attack is not immediately known, but police said it could be connected to a failed extortion. Rebels had torched buses in past attacks in the restive region. The NPA has been fighting for decades now for the establishment of a Maoist state in the country. (Rhoderick Beñez)