Military on the hunt for pro-ISIS militants in South

THE SANDIGANBAYAN has affirmed the criminal charges against former rebel leader Nur Misuari over allegations of anomalous purchases of educational materials when he was governor of the defunct Muslim autonomous region.

The Third Division of the Sandiganbayan junked Misuari’s motion to dismiss all the charges against him, denying all allegations of graft and malversation of public funds.

But the Sandiganbayan found probable cause against the former Libyan firebrand and said trial can now proceed to allow both parties to present their case. “The court must stress that a comprehensive consideration of the merits of the prosecution’s evidence and the defense’s arguments, as to the alleged weakness thereof, is premature at this point and better left to trial on the merits,” it said. 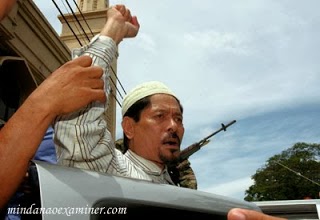 Misuari is being accused of giving undue advantage to White Orchids, CPR Publishing House and MBJ Learning Tools for the procurement of textbooks in 2000 and 2001.

In a report by GMA News, it quoted Misuari as arguing that he cannot be held liable for a transaction that pushed through when he is no longer ARMM governor. Misuari said the payments to CPR Publishing took place in July 2004, MBJ Learning in December 2003, and for White Orchids in July 2004 and September 2005, all of which were covered by the incumbency of former regional governor Parouk Hussin since his term expired on September 30, 2001.

The issue of conspiracy is also non-existent, according to Misuari, as he was detained in Malaysia from December 2001 to January 2002 and for six years in the Philippines from 2002 to 2008. Misuari also said that he was in detention at the Philippine National Police-Special Action Force Training Center in Santa Rosa town in Laguna province when the private companies were paid.

However, the Sandiganbayan said Misuari “merely rehashed the same arguments regarding his alleged non-liability and lack of participation” in the case when it denied his motion to dismiss last year.

According to the report, the Sandiganbayan said it can only take note that Misuari was no longer ARMM governor when the payments were made, but stressed this cannot be the sole basis to dismiss the case at this stage.

“Granting that the Court may take judicial notice of the accused-movant’s years of incumbency as ARMM governor, the same does not necessarily result in his automatic exculpation given the existence of documents relating to the subject transactions which were allegedly signed by him during his incumbency,” the Sandiganbayan said.

Misuari had refused to enter a plea during his arraignment on February 26, prompting the anti-graft court to plead not guilty on his behalf.

Misuari, who is also accused of rebellion by authorities for the September 2013 deadly attack on Zamboanga City, is being protected from arrest by President Rodrigo Duterte.

Duterte, who admitted being a good friend of Misuari, the chairman of the Moro National Liberation Front (MNLF), interceded to the police and military on behalf of Misuari, so he would be free to move around without any fear of being arrested.

He also admitted that he intervened to allow Misuari to travel abroad to attend two conferences of the Organization of Islamic Cooperation in Abu Dhabi and Morocco despite criminal charges against the MNLF leader.

“He came to see me to ask me to intercede in his behalf that he be given temporary pass to go out – kasi may kaso siya eh, ipi-preso siya dito – para maka-attend ng OIC,” Duterte said.

Duterte assured the public that Misuari would return after the conferences this month.

“So I told the military and the police, hayaan ninyo na at babalik ‘yan. He is not a fugitive, he is a revolutionary. And you know what? That guy will always come back. It would be an insult to his person if he is buried in another land. Babalik dito ‘yan, dito magpakamatay,” he said.

While Duterte is protecting Misuari, local government leaders and residents of Zamboanga are demanding justice for the deadly siege that left over 200,000 people without homes following weeks of street battles between security and MNLF forces that killed and wounded some 300 civilians.

It was the second time that MNLF forces raided Zamboanga. In November 2001, Misuari’s loyal forces also attacked Zamboanga and left dozens of civilians dead and wounded. Heavily-armed MNLF gunmen also took hostage over 100 civilians, including women and children, and used them as shield and pawn so they can escape to Basilan and Sulu provinces.

In 2016, Mayor Beng Climaco banned all MNLF rallies in Zamboanga City following attempts by Misuari’s group to hold a peace caravan. “I am giving you a categorical no, you must not disturb Zamboanga anymore. If you want to come up with your rally, make it in your area, Zamboanga will not welcome a rally by MNLF, not at this time because you still have to be accountable with the killings and devastations we are suffering from,” Climaco said.

“The destruction wrought by the 2013 siege continues to linger, as internally displaced persons – both Muslims, Christians and Lumads, most of whom are those who eluded the conflicts in Sulu and Basilan – have suffered the brunt of the MNLF attack in Zamboanga,” Climaco said.

Misuari signed a peace deal with Manila in September 1996 ending decades of bloody war. After the peace agreement was signed, Misuari became the governor of the Muslim autonomous region. But despite the peace accord, there was a widespread disillusionment with the weak autonomy they were granted.

Misuari’s loyal forces and former MNLF rebels, who joined the Philippine Army following the peace accord, attacked a key military base in Sulu’s Jolo town and civilian targets in Zamboanga in 2001 in an effort to stop the government from calling an election in the autonomous region where Misuari wanted to be a perpetual governor.

Misuari then escaped by boat to Malaysia, where he had been arrested and deported to the Philippines and was eventually pardoned and released by then President Gloria Arroyo in exchange for MNLF support to her election bid as well as her allies in the Senate and Congress in 2004. He also ran thrice for governor in Sulu even while under detention, but lost miserably. (Mindanao Examiner, GMA News)

Thank you so much for visiting our website. Your small donation will ensure the continued operation of the Mindanao Examiner Regional Newspaper. Thank you again for supporting us. BPI: 952 5815649 Landbank: 195 113 9935