DAVAO CITY – A senior communist rebel leader was killed in a firefight with security forces trying to arrest him in the southern Philippine province of Compostela Valley, officials said Thursday.

Officials said policemen, backed by soldiers, tracked down Marjun Taba in his hideout in the village of Kapatagan in Laak town on Wednesday and he fought off security forces and eventually was slain in the fighting.

Soldiers also recovered a .45-caliber pistol and two improvised explosives from Taba, the deputy secretary of the Communist Party of the Philippines-New People’s Army Sub-regional Committee 4 under the Southern Mindanao Regional Committee. 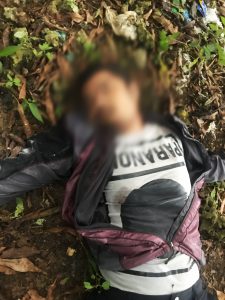 A military photo released to the regional newspaper Mindanao Examiner shows the body of Marjun Taba after a firefight with security forces.

“He was killed in a brief skirmish after he resisted arrest and fought it out with military personnel from the 10th Infantry Division and personnel from PNP Laak who were about to serve six warrants of arrest,” said Lieutenant General Felimon Santos, chief of the Eastern Mindanao Command.

He said Taba was facing multiple criminal charges for murder, attempted murder, and rebellion among other cases.

“Notwithstanding the local government, our units on the ground, and his family’s efforts for him and his New People’s Army cohorts to surrender, they continued to be with the terrorist group and continuously terrorize communities in the boundaries of Compostela Valley, Agusan del Sur, and Davao del Norte,” Santos said.

“We are offering them to peacefully surrender, if they refuse and continue with their violent means, we will employ all legal means to run after them. They can never run away from the long arm of the law, more so with the strong resolve of the government to end the armed conflict,” he added.

There was no immediate statement from the communist rebel group which has been fighting for secessionist for many decades now. (Mindanao Examiner)