Brother of pro-ISIS leader behind Isulan bombing slain in fighting

WMPC cut off electricity supply to ZAMCELCO – now under the management of Crown Investments Holdings, Inc. and Desco Inc. – after it refuses to pay its overdue account of P235 million.

Crown Investments Holdings, Inc. and Desco Inc. took over ZAMCELCO in January this year after bailing out the heavily-indebted and poorly-managed electric cooperative for P2.5 billion.

Now ZAMCELCO claims that WMPC had overbilled the electric cooperative since 2015 by P440 million. 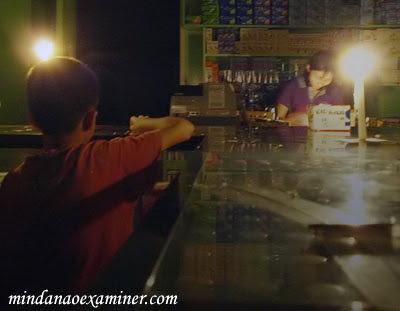 A convenient store uses candles to illuminate its goods while a boy buys some items. (Photo by Geonarri Solmerano)

It was unknown whether former ZAMCELCO officials had knowledge of the overbilling or not, but many executives had been sacked the past years by the National Electrification Administration on corruption allegations, but none of them had been criminally charged.

Now both ZAMCELCO and WMPC are locked in a legal battle with Zamboanga suffering the brunt of the business rift between the two companies. ZAMCELCO also stopped buying electricity from WMPC and is now scouting for new suppliers. It also acquired more expensive diesel-powered generators to be able to supply Zamboanga’s power demand of at least 80 megawatts.

Salazar said rotational power outages, which began in February, have already affected the local economy with many business establishments spending more on fuel to run their generators for hours on a daily basis.

The lack of household electricity also put heavy burden on residents and many of them rely on ZAMCELCO for power supply because they cannot afford to buy their own generators.

Salazar has written a strongly-worded letter to ZAMCELCO and demanding it to pay WMPC and to restore normal electricity supply in Zamboanga. A copy of the April 1 letter addressed to lawyer Jomar Castillo was also posted on Salazar’s Facebook page and reads: “This has reference to the current power situation in our City. As you know, Zamboanga City plays a key role not only in trade and commerce, but in national security as well. Residents and businesses are complaining of longer and more frequent outages since February 4 that adversely affected our local economy prompting me to write this demand letter.”

“While we support the Investment Management Contract and laud your commitment to pump in P2.5 billion into ZAMCELCO, we can no longer tolerate the rotating blackouts. Whether there is legal basis to withhold payment to WMPC must be settled in the proper courts of law. In the meantime, our people cannot suffer further. We have been paying our monthly bills and we see no reason why we are made to suffer the consequences of the electric cooperative’s refusal to pay WMPC. For Zamboanga City that is hub of trade and commerce and also hosts to the Western Mindanao Command, the stakes are too high if power outages will continue.”

In a press statement, Salazar also said electric consumers are demanding ZAMCELCO to provide them with proper utility services. “We have been appealing many times to ZAMCELCO to the extent that the local government even held talks with representatives of ZAMCELCO and WMPC for them to settle their differences or legal problems because everybody is affected by this inadequate supply of electricity. We cannot go on like this and this problem must be resolved quickly,” Salazar said.

Since 2012, Zamboanga also suffered from severe power curtailment – as much as 6 hours a day and at worst, 14 hours or more. And ZAMCELCO – whose manager then was George Ledesma – blamed the power crisis to El Niño weather phenomenon and maintenance shutdown of hydro and coal-fired power plants in Mindanao.

ZAMCELCO could only wait for the construction of the 100-megawatt coal-fired power plant of Alsons Power Holdings which was set to begin operation in 2016 in the village of Talisayan.

But Alsons failed to start building its facility and cited many reasons for the long delay – from the failed Moro rebellion here in 2013 to the P900-million enhancement program it was demanding from ZAMCELCO as an assurance it could pay them for the stable supply of electricity.

Even today, Alsons has not started construction of its coal-fired power plant here and ZAMCELCO said it would not purchase electricity from Alsons or what it is called now the San Ramon Power, Inc. due to the current problems involving its demand for WMPC to refund the P440 million so it can return it to electric consumers.

In a 2015 interview by the regional newspaper Mindanao Examiner, Edwin To, president of the Zamboanga Chamber of Commerce and Industry, said long hours of electricity blackouts increased the cost of business operation and at the same time decreased the productivity of everyone, public and private offices.

To said that business owners who can afford the use of power generators were also complaining because it adds up to the cost of running their establishment.

To, who is also the president of Budgetwise Supermarket, one of the biggest in Zamboanga; and the chairman of the modern Ciudad Medical Zamboanga, previously suggested that the government should push for the so-called Interruptible Load Program or ILP.

According to the Retail Electricity Suppliers Association, the ILP – a program established by the Department of Energy and the Energy Regulatory Commission – aims to help mitigate the energy supply deficiency in the country until new capacities become available on the grid.

Companies with stand-by generation capacities who participate in the ILP will be compensated under this program should they use their own generating facilities during instances of power supply deficit.

But companies that will participate in the ILP will be asked by the distribution utility to “de-load” for particular hours in a day when the power supply in the grid will not be enough for the power demand.

“De-loading” will mean having to run its embedded stand-by generation sets to provide for its own electricity requirements. (The Zamboanga Post)